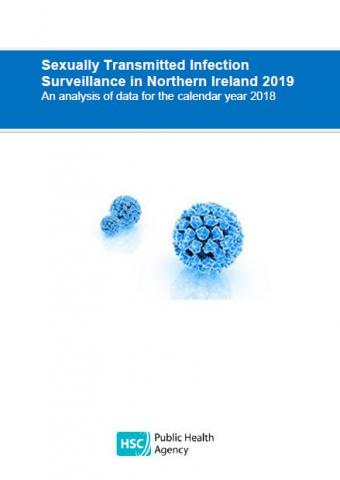 The latest sexual health figures released today by the Public Health Agency (PHA) show an increase in the number of new Sexually Transmitted Infections (STIs)  diagnoses made in Genitourinary Medicine (GUM) clinics in Northern Ireland. In particular, there has been an increase in diagnoses of gonorrhoea and infectious syphilis while new diagnoses of genital warts (first episode) decreased.

The ‘Sexually Transmitted Infection surveillance in Northern Ireland 2019: An analysis of data for the calendar year 2018’ report shows that:

Dr Claire Neill, Specialist Registrar with the PHA, said: “People with STIs don’t always have symptoms, but by having unprotected sex, you could effectively be sleeping with everyone your partner’s ever slept with, putting yourself at risk of getting an STI. Therefore, we are urging people to always use a condom.

“It is also important to take steps to reduce the risk of harm to yourself and others if there’s a chance you have contracted an STI. There are GUM clinics across Northern Ireland, so if you are at risk, make sure you attend one of these clinics to get checked out for free.”

In 2018, 882 new episodes of gonorrhoea were diagnosed in Northern Ireland GUM clinics, compared with 679 in 2017 – the highest number reported in Northern Ireland to date. 80% of these were diagnosed in males, with a high proportion of those in men who have sex with men (MSM). There are also smaller but still important upward trends among heterosexuals.

Dr Neill continued: “The trend in gonorrhoea is particularly concerning. As with elsewhere in the UK, we are seeing increasing levels of antibiotic resistance and this has led to a recent change in treatment guidelines for this infection. There is a real risk that antibiotic options will become less effective in the future, so it’s really important that we take steps to protect ourselves from becoming infected in the first place and reduce the potential for spreading gonorrhoea by wearing condoms.”

“While the majority of the increase in gonorrhoea and infectious syphilis was seen in MSM, this may be due at least in part to significantly increased STI testing levels among MSM during 2018. We’re also seeing smaller upward trends among heterosexuals so it is important that everyone takes the necessary steps to help protect themselves. Avail of regular screening and the support that is available through our GUM clinics – the sooner an STI is diagnosed, the sooner it can be treated.

“The advice is clear, choose to protect yourself and always wear a condom.”

Information on looking after your sexual health, symptoms of STIs (as well as information on STIs which may be symptomless) and details of Northern Ireland GUM clinics can be found at www.sexualhealthni.info

The ‘Sexually Transmitted Infection surveillance in Northern Ireland 2019: An analysis of data for the calendar year 2018’ report can be found here.