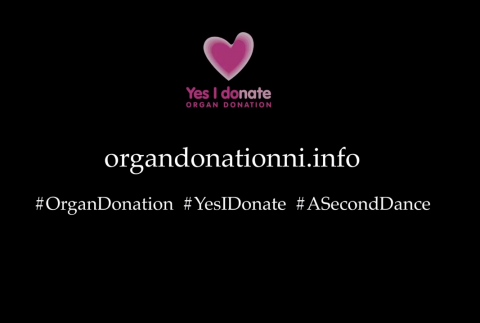 Will you give someone the Second Chance for a Second Dance?

This week (7-13 September 2020) is Organ Donation Week and to mark the initiative, a powerful music video has been released: A Second Dance.

It was first performed in 2019 at the Service of Remembrance and Thanksgiving for Organ Donation and Transplantation, to celebrate and give thanks to organ donors and their families who allowed others a second precious chance at life.

The majority of people living in Northern Ireland support organ donation and would accept an organ if they needed one, however only 47% of us have signed the Organ Donor Register.

As well as joining the Register, it is just as important to share your decision with those closest to you.  Only around half of families agree to donation if they don't know their loved one's wishes, but this rises to 9 out of 10 when the decision to be a donor is known. It gives them the certainty to support the decision at a difficult time.

‘A Second Dance’ was created when singer Karl McGuckin was approached in September 2019 to perform at the service of Remembrance and Thanksgiving.  Met by the poignancy of the event Karl immediately saw the need for a song to be commissioned especially for the service.  He contacted renowned composer Liam Lawton to create a piece that captured the essence of organ donation and the impact it has on the lives of those who receive.  Liam’s niece is also an organ recipient.

The song was received with profound emotion by those in attendance at the service and this led to the creation of the music video to mark the launch of Organ Donation Week 2020.

The track is an appeal about changing hearts, minds and culture. Encouraging people to join the Organ Donor Register, speak to their loved ones, and to share their decision.  The video features local transplant recipients and illustrates the difference transplantation has made to them.  One of those featured is BBC NI Sports presenter Stephen Watson.  Speaking about his support for the production, Stephen commented: “In this important week highlighting organ donation I was delighted to take part in this inspiring project. As someone who recently received a kidney transplant I know exactly the life changing difference that organ donation can make. I urge everyone this week to take a few minutes to consider giving someone the ultimate gift of life.”

Organ donation saves lives.  You could save or transform the lives of up to nine people by donating your organs when you die.

This Organ Donation Week, give the gift of life… take just a few minutes to sign the Organ Donor Register and talk to your family and friends to let them know your decision.  Visit organdonationni.info