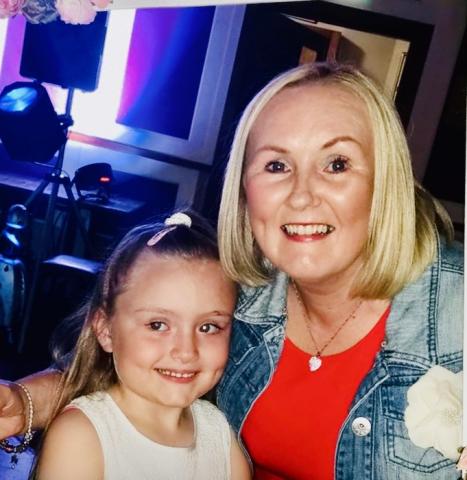 Zarah Reid, 7, from Omagh was diagnosed with type 1 diabetes three years ago, after her mum noticed a number of symptoms, including being tired and going to the toilet a lot.

Type 1 diabetes cannot be prevented and occurs when the pancreas is no longer able to produce insulin. It is the most common type of diabetes in children and young adults.

Zarah’s mum Lorraine explains: “She was a perfectly healthy four year old. She went to nursery school and was just like all the other little girls.

“The first thing we noticed was that she started to have meltdowns for no reason.  I know all young children can have temper tantrums, but this was very out of character for Zarah. When she had them they were very distressing for everyone. In hindsight we can now put this down to her being over tired from the type 1 diabetes.

“The night before Zarah was diagnosed she was up at the toilet every half hour. I thought she had a wee chill in her kidneys. In the morning I got Zarah’s urine sample checked and it showed glucose in her urine. I contacted the GP for an appointment and later that day she was diagnosed with type1 diabetes.

Every year between 100 and 130 children develop type 1 diabetes in Northern Ireland.

Dr Bríd Farrell, Assistant Director of Service Development and Screening at the Public Health Agency (PHA), said: “Children can develop type 1 diabetes at any time. We therefore want to raise awareness of the four most common symptoms of type 1 diabetes to make sure all children who develop the condition are diagnosed early”.

“We are urging parents to make themselves aware of the symptoms and if you do notice symptoms, I would urge you to get your child’s blood sugar checked that day.”

Symptoms in children and young people can develop over a few days or weeks and parents and carers should look out for the ‘4Ts’:

With type 1 diabetes, early diagnosis is important in children, otherwise their condition can deteriorate rapidly with serious consequences such as diabetic ketoacidosis (DKA). DKA occurs when the body starts to run out of insulin. This causes harmful substances called ketones to build up in the body, which needs urgent medical attention and hospital admission.

Dr Farrell continued: “If we diagnose type 1 early, we can start early treatment and avoid diabetic ketoacidosis (DKA) and we can also sometimes avoid hospital admission.

“Keeping an eye out for the 4Ts can result in earlier diagnosis of type 1 diabetes. If parents are concerned about a child they should have their blood glucose (sugar) checked either in the GP surgery or local pharmacy.”

Lorraine added: “For us the main symptoms were tiredness and running to the toilet. I would urge parents to make themselves aware of the 4Ts and if they notice any of the symptoms to speak to their GP without delay.

“When Zarah was diagnosed, it changed everything for the whole family. Diabetes is a really serious condition; it is every day and every night, every meal and every sleep. It never goes away. But we are so proud of how Zarah has coped with all the changes.

“Zarah is a very active 7 year old – she attends Omagh County Primary School, she has an insulin pump, and she is learning to take control of her diabetes and she doesn’t let it stop her.”

Diabetes UK Assistant Director for Local Impact, Dr David Chaney, said: “Diabetes UK uses the 4Ts to help raise awareness about type 1 diabetes as its onset is fast and relentless. The more we know about diabetes the quicker we can take action to prevent devastating outcomes. Parents, carers, teachers and anyone who works with children and young people, should know the 4Ts and if symptoms are recognised, bring the child to their GP immediately asking about type 1 diabetes.”

There are other symptoms aside from the 4Ts that can indicate type 1 diabetes – for further information on the condition, see www.pha.site/type1

DKA is an emergency and needs to be treated in hospital immediately. For further information on the condition, see www.pha.site/dka