Vaccines: still the first line of defence against killer diseases 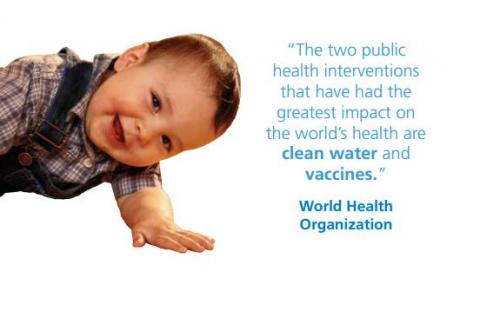 This World Immunisation Week, Dr Jillian Johnston Consultant in Health Protection at the Public Health Agency (PHA) is reminding everyone that vaccines work by protecting society against many lethal diseases, but warns that we cannot become complacent.

“Many childhood diseases that were common in the UK prior to the introduction of vaccination have been dramatically reduced or have disappeared altogether. However, once a disease fades from prominence’, it is easy to forget how serious they could be. Unfortunately, unless vaccine uptake remains high in Northern Ireland, many of these deadly diseases will return from parts of the world where they still occur,” said Dr Johnston.

Protection against polio, along with other ‘diseases of the past’ such as diphtheria and tetanus, remain part of the childhood vaccination programme today, and thankfully the incidence of these three infections has fallen dramatically, with no cases in Northern Ireland in recent times.

The virtual eradication of these deadly illnesses here, as well as a range of others, is thanks to the fact that we are lucky to have a free, comprehensive vaccination programme in place for our new born babies, right up to 70+ year olds.

The MMR (measles, mumps and rubella) vaccination is a key story. From the 1940s onwards, annual notifications of measles varied between 160,000 and 800,000, with around 100 deaths from acute measles each year in the UK. Although a measles vaccine was first introduced in 1968, uptake was low, meaning that there was still a high prevalence through the 1970s and 80s, and children still died.

The MMR vaccine was launched in 1988 when there were still over 80,000 annual notifications of measles across the UK. The year after the vaccine was introduced, the figure dropped to just over 25,000, and has continued to fall. Thanks to the high proportion of people in Northern Ireland making the positive decision to get the MMR vaccine over the past decades, cases of these three illnesses here have fallen significantly. However, these diseases have not gone away and some countries are experiencing outbreaks of measles so we cannot afford to become complacent. Ensuring your children have had two doses of MMR vaccine will give them the best protection here and when travelling abroad.

The whooping cough (pertussis) epidemics in the seventies and eighties are a good example of what happens when vaccine coverage drops. Whooping cough is a disease that can cause long bouts of coughing and choking which can make it hard to breathe. It is accompanied by the characteristic ‘whoop’ sound as the child gasps for breath after coughing. It can last for up to 10 weeks and can be very serious for young children, and even fatal for babies under one year old.

Before the introduction of pertussis vaccination in the 1950s, the disease caused widespread distress, with the average number of notifications exceeding 100,000 every year in the UK. By 1972, when vaccine coverage was around 80%, there were just over 2,000 notifications. During the mid-seventies coverage fell to 30%, as a result major epidemics occurred and in 1978 there were over 65,000 notifications and 12 deaths. These epidemics happened because of a fall in uptake of an effective vaccine, which ultimately resulted in preventable deaths. Thankfully, uptake of the vaccine is now very high again, meaning that there are very few cases of the illness today.

In recent years we have been able to introduce new vaccines to offer further protection against a range of other illnesses of both childhood and older years, such as rotavirus for babies, pertussis for pregnant woman, shingles for 70 year olds, and HPV for girls in year 9 and 10. From September 2019 the HPV vaccine will be offered to all boys in the same way. Like all vaccines that are offered on the immunisation programme, these have been proven to be both safe and effective, and are saving and improving lives.

Dr Johnston continued: “The childhood vaccination programme has been a tremendous success, with Northern Ireland having uptake rates well above the UK average. However, some vaccines have seen a decline in uptake, albeit a small one.

“Some could argue that the immunisation programme has been a victim of its own success; people may have forgotten or have never had the experience in their lifetime of seeing the devastation that measles, polio or whooping cough can have on a community, and some have perhaps become complacent about getting their kids protected against these illnesses.

“But it is only when people continue to get their children and themselves vaccinated in large numbers that we can prevent these diseases, and the possible deaths, so it is vitally important that we don’t take our health and that of our children for granted. Not only that, but getting kids vaccinated also helps protect those who aren’t yet eligible for vaccination, such as tiny babies.

“After clean water, vaccination is the most effective public health intervention in the world for saving lives and promoting good health, and therefore one of the most important things that any parent can do is get their child vaccinated and encourage them to continue this throughout their own lifetime.”