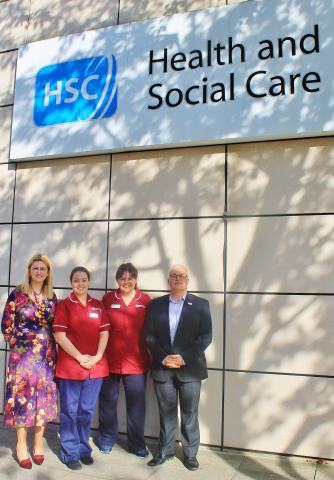 Researchers from both sides of the Irish border have joined together in a large trial that looks at whether an inexpensive medication, already used to treat other conditions, could help prevent those who have already had a stroke from having a further stroke.

The CONVINCE study – which is currently taking place in nine centres across Europe – has been extended to include centres in Northern Ireland and the border counties of the Republic of Ireland. The extension follows a funding boost of just over €600,000 by the Public Health Agency in Northern Ireland, the Stroke Association, and the Health Research Board in the Republic of Ireland.

The trial will recruit around 200 more stroke and Transient Ischemic Attack (TIA) (also known as mini-stroke) survivors living in border areas to find out whether colchicine – a medication typically used to treat gout – could help reduce the risk of further strokes.

Every year there are around 4,000 strokes and TIAs in Northern Ireland, with around 1000 stroke-related deaths. A stroke is a brain attack which happens when part of the blood supply is cut off. Globally, stroke is the leading cause of death and disability.

“We all know the devastating impact stroke can have on individuals and families and we are pleased to help fund this important research project which could make a real difference to the lives of stroke survivors across the island of Ireland and further afield.

This study provides an opportunity for stroke survivors currently living in Northern Ireland and the Irish border counties to take part in a large-scale European research project, and we look forward to seeing the results when the study is completed.”

“When stroke strikes life changes instantly. Recovery is tough and can be made much more difficult for some stroke survivors who live in fear of having another stroke.

We’re delighted to play our part in funding this exciting European research which could help to stop the devastating impact of stroke and support stroke survivors in Northern Ireland and beyond to focus on rebuilding their lives”.

Participating stroke survivors living in Irish and Northern Irish border areas join a larger study taking place at locations across Europe including the UK, Spain, Greece, Germany, Belgium, Estonia, Lithuania and the Netherlands. Half of the trial participants will be treated with the medicine, colchicine, as well as receiving usual care, while half will receive usual care without the medicine.

Previous trials in people have found that heart attack survivors treated with colchicine had fewer heart attacks and strokes, compared to those who didn’t receive the medication. The CONVINCE trial hopes to reveal whether the same medication could reduce the risk of stroke survivors having further strokes.