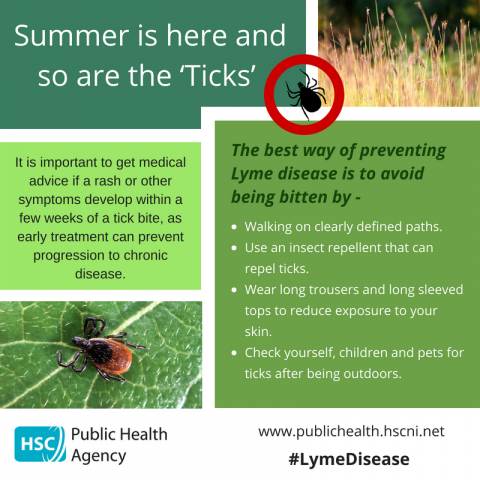 As we venture outdoors over the summer months the Public Health Agency (PHA) is urging everyone to take steps to protect themselves from tick bites. Tick bites can cause Lyme disease, a serious and debilitating disease which can be transmitted to humans through their bite.

Dr Michael Devine, Consultant in Health Protection at the PHA, explained: “Lyme disease is a bacterial infection which is transmitted by tick bites. The earliest and most common symptom of Lyme disease is a pink or red circular rash that develops around the area of the bite, 3 to 30 days after someone is bitten. The rash is often described as looking like a bull’s-eye on a dart board. You may also experience flu-like symptoms such as tiredness, headaches and muscle or joint pain. If Lyme disease is left untreated, further symptoms may develop months or even years later.”

Ticks are tiny spider-like creatures, which feed on the blood of animals and sometimes people. If you are involved in outdoor activities which take you into the countryside, parks or gardens with wildlife such as squirrels and hedgehogs, you may be at risk of tick bites.

Cases of Lyme disease are often acquired through recreational activities including dog walking, camping, hiking and mountain-biking, where tick exposure is more likely.

The best way of preventing Lyme disease is to avoid being bitten when you are in grassy or woodland areas known to have a high tick population. The following precautions might help to prevent Lyme disease:

Dr Devine added: “Late spring, early summer and autumn are peak times for tick bites, which coincide with people venturing outdoors in the warmer weather. It's important that people take preventative measures against tick bites and also look out for ticks after visiting affected areas.”

“Lyme disease can be difficult to diagnose so it is important to get medical advice if a rash or other symptoms develop within a few weeks of a tick bite as early treatment can prevent progression to chronic disease.”

Currently there are no vaccines to defend against tick-borne disease in the UK and Ireland. Therefore, the best defence is to avoid being bitten.

Only a small number of ticks are infected with the bacteria that cause Lyme disease. A tick bite can only cause Lyme disease in humans if the tick has already bitten an infected animal. However, it's still important to be aware of ticks and to safely remove them as soon as possible, just in case.

If you find a tick on your or your child's skin:

Some veterinary surgeries and pet shops sell inexpensive tick removal devices. These may be useful if you often spend time in areas where there are ticks.