Pregnant women reminded to get the whooping cough vaccine 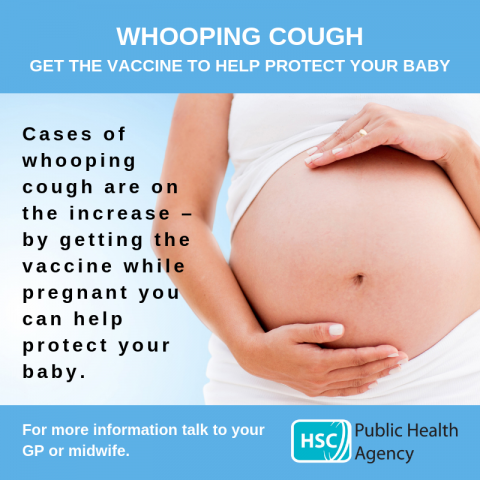 The Public Health Agency (PHA) is reminding pregnant women to get the whooping cough (pertussis) vaccine between 16 and 32 weeks of their pregnancy.

Up to 19 June 2019, 44 cases of confirmed whooping cough in Northern Ireland have been reported to the PHA, of which just over one fifth were in infants under 6 months of age and so too young to be protected by their routine childhood immunisations given at 2, 3, and 4 months of age. This is higher than last year, when there were 16 cases during the same time period.

Whooping cough is a disease that can cause long bouts of coughing and choking, which can make it hard to breathe. It can be very serious for infants under the age of 1 year, and sadly even fatal in young babies. The evidence shows that babies born to vaccinated mothers are 90% less likely to get the disease than babies whose mothers were unvaccinated.

Dr Jillian Johnston, Consultant in Health Protection at the PHA, said: “Whooping cough continues to circulate in Northern Ireland and every 3–4 years it is normal to see increased activity, which is what we are experiencing this year. However, babies under 3 months are too young to have received their routine childhood vaccinations and are at greatest risk of developing more serious disease. It is therefore really important that women receive the pertussis vaccine during every pregnancy so that their baby is protected against whooping cough in their first months of life.

“In 2018/19, 67% of expectant mothers that delivered in Northern Ireland received the pertussis vaccine. We want to encourage all pregnant women to get the vaccine and so reduce the risk of their baby catching whooping cough after he or she is born.

“The best time to get the vaccine is between 16 and 32 weeks of pregnancy, but if a woman misses out, she can still get it later in pregnancy, although the sooner she gets it the better. The vaccine is given at your GP’s surgery – make sure you make an appointment to get it.”

Parents should also be alert to the signs and symptoms of whooping cough. They include severe coughing fits accompanied by the characteristic ‘whoop’ sound in young children and a prolonged cough in older children or adults. Very young babies may not develop the ‘whoop’ but may have severe coughing bouts and difficulty catching their breath.

It is also advisable to keep babies away from anyone showing the signs and symptoms of whooping cough.

For further information on whooping cough and the vaccination programme, please see the PHA guidance at www.pha.site/whoopingcough or ask your GP or midwife.