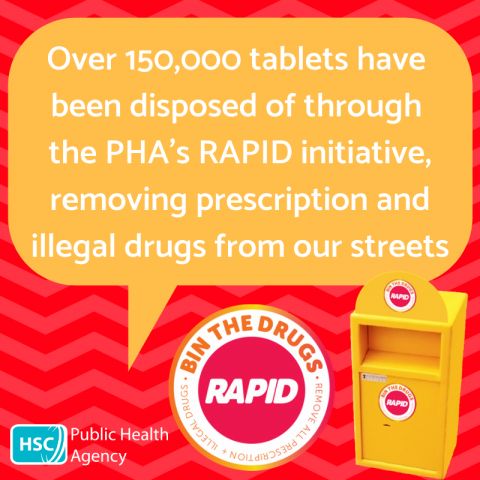 More than 150,000 tablets have been disposed of through the Public Health Agency’s (PHA) RAPID initiative which is helping to remove prescription and illegal drugs from our streets.

The RAPID (Remove All Prescription and Illegal Drugs) scheme provides drug disposal bins to facilitate the disposal of unwanted drugs easily and discreetly.

Kelly Gilliland, Health and Social Wellbeing Improvement Manager at the PHA, said: “The RAPID initiative provides a safe way for anyone to dispose of drugs whether they are prescribed or illegal, and as part of ‘Bring Back Your Unused Medications Week’ (17-23 September) we are highlighting how these bins can help make communities safer places for everyone.

“The bright yellow RAPID bins are situated in many public locations including a number of shopping centres and community centres, but within these venues they are placed in a discreet place so tablets can still be disposed of anonymously. There are currently 30 RAPID bins in place throughout Northern Ireland, with more planned.

“Drug misuse, involving both illegal and prescription drugs, is sadly a common issue and causes suffering and tragedy to individuals, families and communities.

“The PHA and the Police Service of Northern Ireland (PSNI) have been working closely with local Drug and Alcohol Coordination Teams (DACTs) and Policing and Community Safety Partnerships (PCSPs) to identify and work with communities and businesses within their catchment areas that could benefit from taking part in the initiative and having a RAPID drug disposal bin installed.”

Some of the most common drugs disposed of in the RAPID bins are Diazepam, Citalopram, Gabapentin, Quetiapine, Mirtazapine, Pregabalin, Tramadol, Naproxen, Co-codamol, Amitriptyline, Paroxetine, Kapake, Fluoxetine and Codeine.

For more information on existing RAPID bins and an interactive map on where they can be found visit www.drugsandalcoholni.info/RAPID

The RAPID initiative was initially piloted in 2010, and due to its success, as a joint health and community safety initiative, all of the partners are keen that it is further developed and expanded over coming years to install further bins, enabling more people and communities to learn more about the risks and dangers of drug misuse and to dispose of unwanted drugs easily and discreetly.