STI testing and diagnosis on the rise – PHA 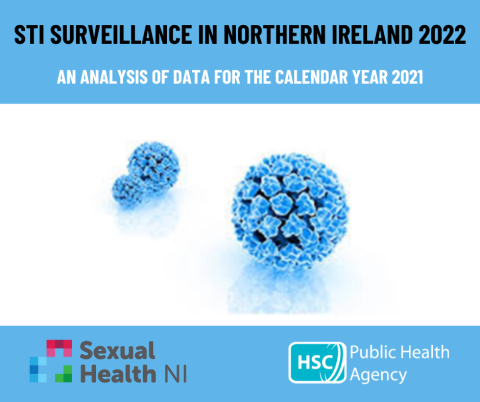 The latest sexual health figures released today by the Public Health Agency (PHA) show an overall increase in both testing and diagnoses of sexually transmitted infections (STIs) in Northern Ireland.

In 2021, there was a 47% increase in the overall number of STI tests carried out compared with before the pandemic in 2019. This is due to a significant increase in home STI testing, commissioned by the health service.

Ten percent of home tests were positive, and this positivity rate has not fallen with the increased testing, which would suggest that people are being tested appropriately and finding a previously unmet need.

There was an increase in diagnoses made in GUM across all STIs groupings, with new STI diagnoses up by 5%; other STIs up by 15% (i.e. patients treated for recurrent or chronic infection, and contacts of cases); and other diagnoses requiring treatment in GUM up by 16%.*

There is variation between trends for different types of STI in 2021 compared with 2020. For example, chlamydia increased by 35% and gonorrhoea by 43%.  However, there has been no significant change in the new diagnoses of genital warts, infectious syphilis and genital herpes simplex.

The increase in testing will have contributed to an increase in STI diagnoses, however the positivity rate is still high indicating an ongoing burden of undiagnosed infections.

The COVID-19 pandemic caused major service disruptions, so caution is also required in making any comparisons between different time periods.

Dr Gillian Armstrong, Consultant in Health Protection at the PHA, said: “The increase in STI testing and diagnosis in 2021 reflects substantial improvements in access to testing and allows for the identification of people who are living in Northern Ireland with STIs to access treatment and decrease the risk of complications and of onward transmission to others.

“It’s really good that we are seeing an increase in testing, both through GUM clinics and at home, as earlier diagnosis can mean treatment can begin sooner and the chances of transmission to others is reduced.”

Young people and gay, bisexual and other men who have sex with men are most likely to be diagnosed with an STI.

Dr Armstrong continued: “While it is encouraging to see more people availing of STI testing here, we would really like to see a reduction in the numbers of STIs diagnosed each year. This will only occur if people take proactive steps to look after their sexual health and wellbeing.

“If you are sexually active, use condoms – when used correctly, they are the only form of contraception that can protect against both unplanned pregnancy and STIs. If you are sexually active, using condoms is an important part of taking care of your sexual health. Limit your number of sexual partners and get tested quickly if you think you might be at risk of having contracted a STI.

“Men who have sex with men having unprotected sex with casual or new partners should be screened for HIV and other STIs at least annually, and every three months if changing partners regularly, due to the increased risk of infection. They should also consider the use of PrEP (pre-exposure prophylaxis) which can reduce an individual’s risk of getting HIV from sex. When taken as prescribed, PrEP is highly effective for preventing HIV, however it does not protect against other STIs so the use of condoms remains really important.

“Remember that people with STIs don’t always have symptoms. The best way to protect yourself is by choosing to use a condom when having sex and taking an STI test if there is a chance you have contracted an STI – simply order a free and discreet home STI test now at www.sh24.org.uk or make an appointment at your nearest GUM clinic.”

Information on looking after your sexual health, symptoms of STIs (as well as information on STIs which may be symptomless) can be found at www.sexualhealthni.info

The ‘Sexually Transmitted Infection surveillance in Northern Ireland 2021: An analysis of data for the calendar year 2021’ report is available at www.pha.site/STI

*An explanation of the STI groupings can be found in Appendix 1 of the report.

SH:24 is a sexual health testing service that provides confidential home testing for chlamydia, gonorrhoea, syphilis and HIV. The service became available to residents in Northern Ireland in October 2019 It is targeted at people who are asymptomatic, and is free at the point of delivery.

People aged between 20-29 years of age accounted for 57% of tests issued. SH 24 is used across all Trust areas, with residents of Belfast Trust accounting for over one third of all test kits issued.

The reduction in diagnoses of STIs in GUM clinics in 2020 is likely to reflect restricted access to services during the COVID-19 pandemic. The restrictions on social mixing put in place for COVID-19 may have also had some impact, therefore caution is required in making any comparisons to other time periods.