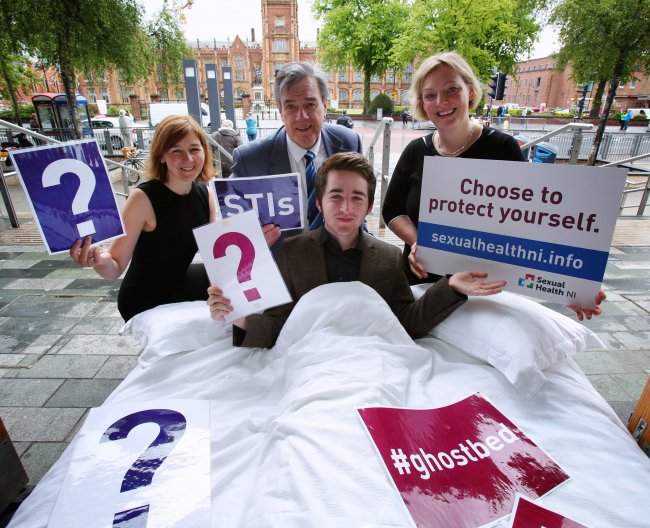 Sexually Transmitted Infections (STIs) are on the rise in Northern Ireland and to try and reverse this upwards trend the Public Health Agency (PHA) has recently launched a major new campaign aimed at improving and protecting people’s sexual health and wellbeing.

Northern Ireland had the largest proportional increase in new HIV diagnoses anywhere in the UK between 2000–2013, and the overall number of people here living with the condition has almost doubled over the past decade. There were also 537 new episodes of uncomplicated gonorrhoea diagnosed in Genito-Urinary Medicine (GUM) clinics in 2013, compared with 451 in 2012 and 336 in 2011.

Dr Louise Herron, Consultant in Public Health Medicine at the PHA, said: “By having unprotected sex you could effectively be sleeping with everyone your partner’s ever slept with, putting yourself at risk of getting HIV or another STI.

“The Health Survey Northern Ireland 2013/14 found that  in the 16–24 age group, around a quarter of people said that they had three or more sexual partners in the last year. The Health Survey also indicated that nearly a third of people agreed that drinking alcohol had contributed to them having sex without using a condom. That’s why it is so important that both men and women plan ahead, prepare for the possibility of sex, and carry condoms.

“People with STIs don’t always have symptoms, for example 24% of people with HIV don’t know they have it, so anyone having unprotected sex could be putting their health at risk.”

The campaign will specifically target 16–34 year olds as this age group has the highest rate of STIs, and it will encourage them to protect themselves.

Dr Carol Emerson, Consultant in Genito-Urinary/ HIV Medicine at Belfast Trust, added: “We are also encouraging people to get tested if they have put themselves at risk. Only one in nine people surveyed in the Health Survey Northern Ireland said they had attended a GUM clinic, which shows there could be a lot of people out there with untreated infections that they are continuing to spread. GUM clinics are situated across Northern Ireland, staff are non-judgmental and we welcome everyone who takes responsibility for their sexual health by getting checked out.”

To accompany the campaign, a new website has been developed with lots of information on looking after your sexual health, symptoms of STIs (as well as information on STIs which may be symptomless) and details of Northern Ireland GUM clinics: www.sexualhealthni.info

Dr Anne Kilgallen, Deputy Chief Medical Officer at the Department of Health, Social Services and Public Safety, said: “Interventions, such as this campaign, have an important role in preventing sexually transmitted infections because they encourage people to reconsider their risk and behaviour. In addition to raising awareness of sexual health issues, the PHA’s campaign will provide accurate advice and signpost people to reliable sources of support and help.”

Cancer campaign to raise awareness and save lives

At least one in three of us will get cancer, and with an increasing number of cases each year in Northern Ireland, the Public Health Agency (PHA) has recently launched a major new campaign aimed at raising awareness of signs and symptoms of cancer and encouraging people to speak to their GP if they experience any of them.

Nearly half of us (49%) would be put off going to the doctor if we had a symptom due to being worried about what they might find, but the earlier cancer is diagnosed, the easier it can be to treat, so the ‘Be Cancer Aware’ campaign highlights how important it is to know what to look out for and to get yourself checked if you notice anything which could point towards cancer.

Dr Miriam McCarthy, Consultant in Public Health Medicine at the PHA, said: “There are over 10,000 new cancer diagnoses each year in Northern Ireland. With advances in treatment and care over recent years, there is often a lot that can be done to tackle cancer when it appears, but early detection and treatment are essential.

“Survival rates in Northern Ireland for some cancers fall below what is achieved elsewhere in the UK and Europe. Some of this may be due to low levels of awareness of cancer symptoms and a reluctance to talk to a GP at an early stage.

“A survey undertaken on behalf of the PHA revealed that barriers to seeking help in relation to cancer symptoms include being worried about what the doctor might find and embarrassment. We are urging people to set these concerns aside and speak to their GP if they have any signs or symptoms.

“Finding cancer early and getting it treated can really make the difference and greatly improve the likelihood of survival.

“It is therefore vital for all of us to be cancer aware, to know the signs and symptoms of cancer, and to speak to a GP if we experience any of them.”

Cancer can strike at any age, but almost 9 out of 10 cancers are diagnosed in people over 50, so that group, in particular, needs to be aware of how important it is to recognise any changes to their body and speak to their doctor if something isn’t right.

Some of the common signs and symptoms you should ask your doctor to check out include:

The multi-phased campaign is being developed in consultation with a broad range of cancer charities and stakeholders, and will begin with a cross-platform programme of general awareness-raising, before turning its focus to specific cancer sites in turn.

To support the campaign, the PHA has developed a comprehensive new website at www.becancerawareni.info

The website provides information about cancer signs and symptoms, explains what to do if you’re concerned, and signposts to recommended sources of support or further information.

More information on cancer is also available at www.nidirect.gov.uk/cancer.htm